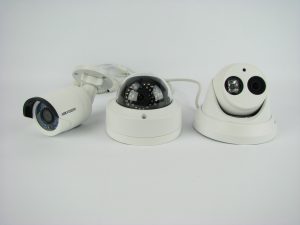 Outdoor IP security cameras are available in several different housing styles, with dome cameras and bullet cameras being the most common.  There are many reason why you may want to pick one over another for a given installation due to the advantages and disadvantages of each style.  I’ll use these three Hikvision models that all use the same image sensor as examples.

Bullet cameras are typically shaped like a cylinder and have the camera lens on one end. They use a bracket for mounting and are usually a little easier to install than the others.  They’re also frequently less expensive due to less material being used in their construction. Just pick a mounting location and attach the bracket, and point the camera in the direction that you want. It’s easy for anyone looking at the camera to know the general area it’s covering, which is good if you want to let them know they’re being watched, but bad if someone can come up behind it knowing that they’re not being watched. If the bullet camera is mounted too low it can be easily knocked out of position or destroyed, and even when mounted up high something could be thrown at it to do the same. Some have exposed wiring but many like this one run the wiring through the base, concealing and protecting it.

Dome cameras are enclosed within a cast aluminum housing and acrylic dome, which makes them much more resistant to vandalism than other models.  The dome can introduce problems though, such as blurred vision from water droplets if mounted where it’s directly exposed to rain, and glare from built-in infrared lighting, especially if there is dust or a spider web on the dome.  Even with a clear dome it is difficult to tell from a distance which direction the camera is pointing, and smoked domes are available for some models to make them really stealthy.  Installation can be more complex and the adjustment range is less flexible than a bullet, but most people find that dome cameras are more visually appealing than other camera styles.

Turret cameras, sometimes called eyeball cameras, act kind of like a round bullet camera, but mounted inside of an adjustable housing.  They’re easier to install than a dome but not quite as easy as a bullet.  More vandal resistant than a bullet but nowhere near as much as a dome.  This particular example has the Hikvision EXIR infrared LED which eliminates most common problems with having the LEDs surround the lens of more typical designs.

Which one is best?

It really depends on what’s important for each individual camera installation, and locations with multiple cameras may want to use more than one model.  If you need vandalism resistance then a dome would be best, but if you don’t need that then one of the other models may have better performance, especially with night vision.  The turret with its EXIR IR LED has the best night vision of these three, and also the fewest problems with insects and spiders affecting the night vision.  If you need something inexpensive to mount in a small location then the bullet is best.  It has a small mounting bracket, where the dome and turret require a mounting surface as large as their base.